A plea bargain is a negotiated agreement between a criminal accused and a prosecutor, where the accused agrees to voluntarily plead “guilty” or “no contest” for a concession from a prosecutor in exchange for a plea.

Plea bargaining has many advantages and has been part of Kenya’s criminal justice system for many years, yet it has not been widely applied. The Office of the Director of Public Prosecutions (ODPP) has published Plea Bargaining Guidelines in 2019 and is leading a national sensitization campaign to improve understanding, and use, of plea bargaining. Training is being rolled out for prosecutors and others working in the criminal justice system, complemented by sensitization for the media and citizens. See downloads available in English and Swahili.

For more information, visit the ODPP website or email info@odpp.go.ke. 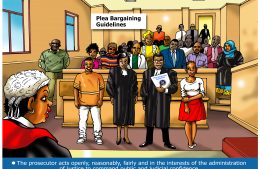 Not every criminal case should be prosecuted to finality through a trial if it can be resolved by alternative means. Given that in some cases remandees remain in prison custody during court proceedings, plea bargaining is a creative provision in the law that can decongest prisons.

The law places the burden on the prosecution to prove its case beyond reasonable doubt. However, advocates are encouraged to embrace a culture of advising their clients to consider a plea bargain especially in the face of overwhelming evidence rather than the usual practice of encouraging them to plead “not guilty”. If properly and more widely employed, plea bargaining will serve as an important and effective tool to keep the wheels of justice moving in a timely and cost-effective manner.

This campaign is supported by NCAJ Council members, Court Users’ Committees, the European Union, US Department of Justice

What is Plea Bargaining?

A plea bargain is a negotiated agreement between a criminal accused and a prosecutor where the accused agrees to voluntarily plead “guilty” to a criminal offence in exchange for an agreement by the prosecutor to drop one or more charges, reduce a charge to a less serious offence or recommend a specific sentence to the judge.

The advantages of plea bargaining include:

All matters agreed between the prosecutor and the accused person or his/her legal representative shall be put in writing as the Plea Agreement and signed by both parties. The ODPP Plea Bargaining Guidelines contain a Plea Agreement template.

The adoption of plea bargaining globally has increased by 300% since 1990.

The prosecutor shall carefully consider the impact of the Plea Agreement on the victim and community as well as the prospects of successfully prosecuting any other person implicated in the offence.

A Plea Agreement shall be binding upon acceptance by the court.

Office of the Director of Public Prosecutions

Poster What is Plea Bargaining? English